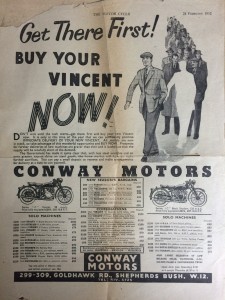 Formed in 1927 by Mr Robert McLellan, their first premises were at 301a Goldhawk road. The name of the business came from a Mr Conway who was at that time one of Mr McLellans partners.

Originally the company dealt almost exclusively in motorcycles but over the years came to deal in Morgans Reliants and eventually cars.

They’d had dealings with the HRD Company since 1930 when Conways used to buy HRD’s secondhand motorcycles that had been taken in part exchange for at that stage the factory dealt directly with the public.

In 1934 Conways became official HRD agent, one of only two appointed in London

It was only a matter of time before Conway’s specialized in Vincent’s and HRD’s, it was not unusual for the shop to have a hundred new machines lined up in the 1950’s then run by Sid Bloomfield.

In 1980 Conways was taken over by Chas and Ann Guy who moved the company to Tankerton in Whitstable. Here it stayed until 1992 when Chas was tragicly killed at Goodwood whilst riding his beloved Vincent at the hill climb.

In 1993 Conways was bought by Colin and Ann Jenner and moved to the Maidstone area, they ran the Company restoring bikes and providing parts and services for all Vincent’s and building upan impressive series A parts list to keep the earlier bikes on the road.

In 2008 Gary Drake owner of Godden Engineering bought Conway’s to run alongside Goddens who were already producing Vincent parts including front and rear cylinder heads. Colin Jenner then retired.

Gary then employed Steve Higgins for the day to day running of Conway Motors, a life long motorcyclist and precision Engineer. Steve helped his father restore their Comet at the age of 10 followed by total engine rebuild at the age of 17.

The two companies compliment each other, and all engineering work can be done in house to a high standard.